6 days into the year and already i finished a book! Okay, technically, I just read it in one sitting, so this bodes well for me as I target to finish 50 books this year. 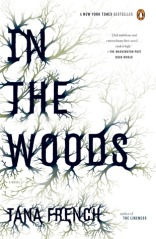 In the Woods by Tana French has been lying around digitally for the past two years, an impulse buy since I read good things about it. And of course, I’m a sucker for brainless murder mysteries wrapped in a cheesy love story. But upon skimming through the first few pages, I realized this is definitely not my usual James Patterson/Mary Higgins Clark fare. I figured it required a bit more seriousness and thinking, so I just set it aside. Two years later, it was gathering electronic dust in my Kindle.

But after finishing Gillian Flynn’s Gone Girl (my 2nd best read of 2012) in one sitting too, I decided my mystery palate is ready for more “hi-brow” fare. And so I started reading on January 5, 10PM and finished four hours later. And then stared at the ceiling for an hour, just basking in the afterglow of the story. Then had disturbing dreams about its hero/anti-hero Rob Ryan. Then woke up feeling both elated and depressed when remembering how his story turned out.

If you haven’t figured it out yet, I absolutely loved the book. But holy cow, it is depressing.

The story starts out with the disappearance of two twelve year old kids in the woods while a third one is found standing gripping a tree in silent terror, wearing blood soaked socks and shoes, and with absolutely no memory of the past few hours. Twenty years later, that kid is now a Dublin Murder Squad detective and investigating the death of a 12 year old girl, found murdered in the same woods and may or may not be connected to the disappearance of his friends. That’s all I’m going to say about the plot.

Did I mention that the story is set in a small town in Dublin, where everything seems so dreary and rainy and eerie and shrouded in an unnamable mystery? The way that Tana French described every scene, every detail, every raindrop, every shadow, every rustle of the leaves in the woods, made me feel like I was watching a movie with one hand over my eye (but peeking through my fingers of course).

And Rob Ryan…sometimes I want to strangle him and then I want to hug him and make him all better (so yeah, obviously I have a crush on this flawed character). His partner Cassie Maddox (who is the heroine in Tana’s second book, The Likeness) is sort of the cool, manic pixie dream girl (but tougher) only, you’re not really sure if what he says about her is real because we only see her through his eyes (I’ll find out though when I read The Likeness)

Memory (or the lack of it) is also a minor character here and how our brains are not built to remember things clearly and chronologically and how sometimes, no matter how hard you force yourself to remember, there are some things that will be lost in the ether.

The reason why I have a love/hate relationship with this book is because not everything is tied up in a neat little bow and everyone lived happily ever after. Of course it’s not the author’s fault. I blame me for having ingested all those Hollywood formula of everything has to be resolved and someone always ends up with someone and everyone who’s evil is punished and the good people are rewarded. Not to say that none of this happened here (this is spoiler free dont worry) but not everything happened the way I was conditioned to think. So it left me with a feeling of loss and emptiness (if we’re being melodramatic about it) that until now I can’t shake off.

And that is why I want you to read it. Not just so I have someone to talk to about it, but also so we will realize that not all stories have to end the way we’re used to. And because it is a darn freaking good read.

So yeah, want to go on an adventure in Knocknaree, Dublin?

“I had learned early to assume something dark and lethal hidden at the heart of anything I loved. When I couldn’t find it, I responded, bewildered and wary, in the only way I knew how: by planting it there myself.”

“What I am telling you, before you begin my story, is this — two things: I crave truth. And I lie. ”

“For a moment, I felt as if the universe had turned upside down and we were falling softly into an enormous black bowl of stars, and I knew, beyond any doubt, that everything was going to be alright.”

“Absence of evidence is not evidence of absence.”

Posted by idaflutterby on January 8, 2013 in Books